I’m probably a month or two late with this post, but my hay fever is at its peak now so this might help a few of you! 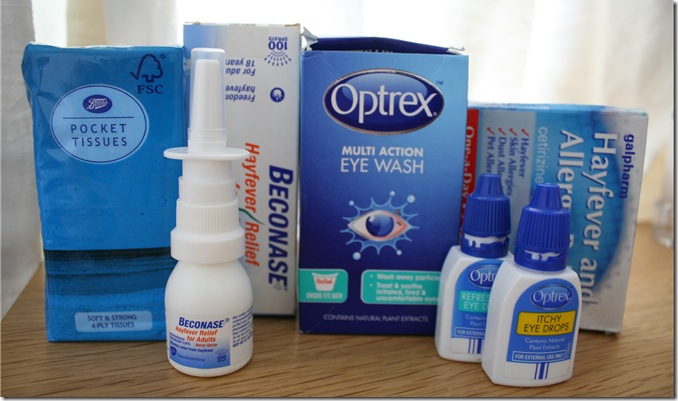 My experience with hay fever – I have suffered with the worst hay fever every spring/summer since the age of about 13. Exam times at school were always extra terrible for me because trying to revise and sit in school halls scribbling was bad enough in the heat (blame the school blazers) without the extra stress and suffering from hay fever. I used to have to scrape my fringe off my face (to stop it irritating my itchy eyes) and carry around a bag of tissues everywhere I went. This also meant that I could never go to the park with friends, school sports days were terrible, no picnics or BBQs unless I was prepared to deal with the consequences of suffering.
I DID find a cure that I was given from the age of 17-19… an injection called Kenalog which was provided by the NHS. I had the injection at the start of every spring for about three years that I literally used to have to beg my doctor for (it contained steroids which have side effects – such as stunting growth – I’m 4’11’’ anyway, I really didn’t care about that!). I haven’t been able to get the injection since because my doctor refuses to give it to anyone anymore so I’ve had to carry on suffering. (You can read about Kenalog here)

I’ll let you know the basics of what I use religiously at this time of year to lessen the effects of hay fever.

Beconase Nasal Spray – I have no idea if this actual works or not, it doesn’t really ever seem to do anything than make me more snotty and sneezy than usual, but I like using it because it might be doing something and it does clear my nose for a short period of time after using.

Optrex Eye Bath – Optrex is my absolute saviour at this time of year. I suffer with the most itchy, red eyes which are unbearable – they get particularly bad at night before bed but this stuff really helps. You pour the liquid solution into the little eyebath, place it over an eye, swing your head back and slowly you open your eye in this solution to give it a good rinse/clean. This feels incredibly soothing and takes the itching away for a while, although its super messy and I always end up with the liquid all over me.

Optrex Itchy Eye Drops – This stuff is also incredible and I always carry it in my handbag. If I start rubbing my eyes or if they start to feel drowsy after taking hay fever tablets, I just squeeze two drops into each eye and they immediately feel better.

Hayfever tablets – I have tried them all and none stand out any better than others, they don’t completely take all the symptoms away but I take them every morning anyway. I have given up buying the expensive branded ones and nowadays just opt for chemist own-brands because they include the same ingredients to the dearer ones anyway.

Tissues – You can never have enough!

Last year my Dad bought me the contraption above – Medisana, Medinose Plus (I believe he got it in Amazon for around £60 – its probably a bit cheaper now!). You basically have to stick the little prong bit up your nostrils for five minutes whilst a red light glows in your nose, three times a day. I don’t know how on earth this works, but it really helped my hay fever last year. It cleared my nose and lessened the symptoms ALOT. I know what you’re thinking, it looks RIDICULOUS, yes, yes it does, I get teased all the time when I use it but if it helps then I’ll do anything! You can read reviews on Amazon here. ( I don’t mind if you laugh your head off at the photo above, I forgive you!)

So that’s’ my guide for surviving hay fever this year, I’d love to know what you all use also.

Have you got anymore tips/products to help me?

EDIT – Last weekend I visited ‘same day doctor’ and had the Kenalog injection! I am no longer suffering with hayfever (it took about three days to kick in fully). My amazing mum payed for the injection (it is pretty pricey) but its very worth it.