Hi everyone! Let me introduce you to a super special person to me, my best friend Alex! Today he is reviewing a fake tanning product for me; Tan Organic. He has written a bloody good (and hilarious) review which you can read below.

Alex and I over the years!

Alex’s Review
When Katie asked me to review Tan Organic I was so excited! The packaging talks about how it is entirely organic and has anti-ageing properties. What more could you want?! I love to pamper myself and I just couldn’t wait to try it out. I usually use whatever fake tan is on offer (usually in lotion form as it is easier to use) so I was a bit apprehensive about Tan Organic. Katie forwarded me a video explaining how to apply the tan and it seemed easy enough. Basically just apply small amounts in circular motions until the tan seems to have blended in. Easier said than done…!

The Night Before…
Firstly I exfoliated and shaved then made sure my body was completely dry, then moisturised key areas; hands, elbows, feet and knees. I used my two favourite products, St. Ives and Jergens Coco Butter moisturiser, which has the most amazing smell! It is literally like heaven.
So once this was all done I then applied the tan. It’s a lot more watery than I am used to using so the first time I applied it to the mitt it ran straight off and all over the floor (so beware!) although once I applied it to my skin it was a bit easier to use. I used the circular motions as I was told to do so but one thing I found whilst using the tan was the sheer amount of time it took to just blend in, it seems to stay on top of my skin for a long time, making me feel uneasy, worrying about tan lines etc. Every time I would work the area, it just seemed to move the tan around making me have to work it in more! I did this for a very long time indeed. I don’t think I used an excessive about of tan as well. I applied the tan twice on the mitt for my entire arm and top of my chest. When you’re doing this, you’d get build of tan so again you would just have to keep rubbing it in. I did this over my entire body.

(Above: the liquid tan and image showing chest after rubbing the tan in for ten minutes – still patchy and not sinking into skin properly).

In the video (here) it explains that when it comes to your hands and feet to rub the mitt on it as you have been doing on the rest of your body. Now, when I usually tan with lotion I just put some moisturising cream on my hands and blend in some tan from my forearms and shins to my hands and feet because it has a tendency to take the tan more than the rest of you. But I followed the instructions anyway.

After I had done my entire body I had to rub the mitt over myself again because yet again more darker patches had appeared. This was extremely annoying as it really shouldn’t take over 30 minutes to tan. I can do it in less than 10 usually.

Once I was all done, I put some baggy shorts and waited for the stuff to dry, it says it should take 10 minutes to dry, but to be blunt that is completely wrong, I was still sticky when I went to bed an two hours after I started the process! I looked a lovely colour after application and the bottle says how after a few hours that is the colour you will be. So putting two and two together I thought I was going to be a glorious colour if it just went a bit darker. So with this in mind I went to bed (still extremely sticky and uncomfortable). The tan didn’t rub off onto my bed sheets but it did rub off onto the waistband of my shorts which was a bit annoying. 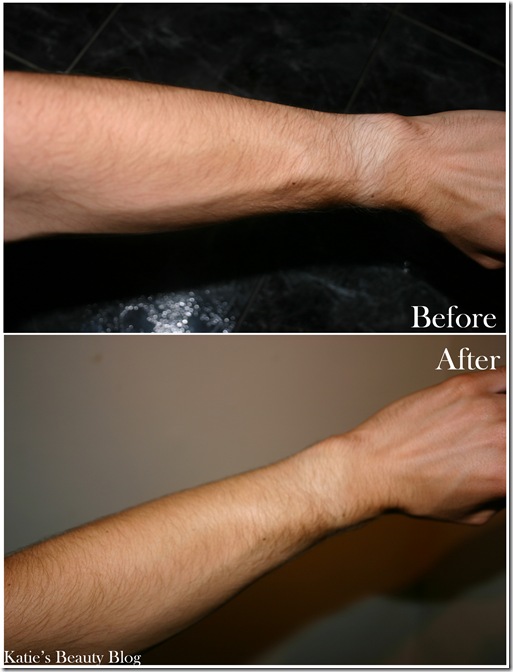 (note: watch strap line almost vanished in the after shot). 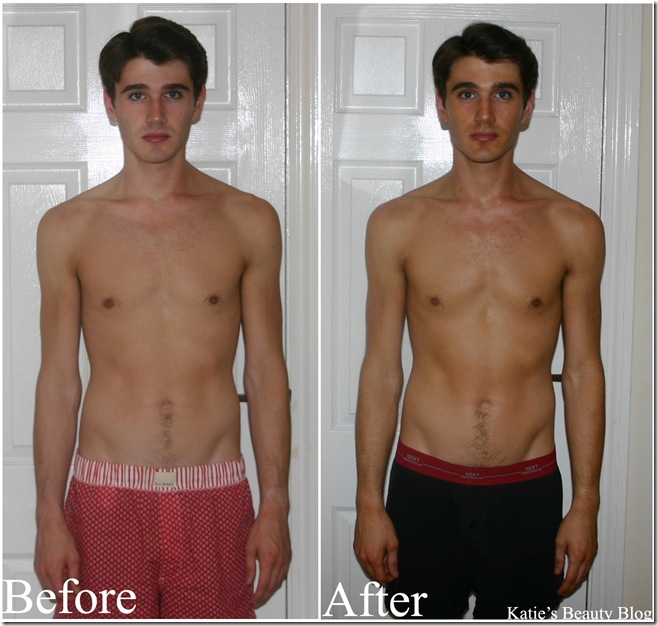 So when I usually wake up after tanning I am a bit darker than I would want to be but that just washes off and I am a nice colour underneath. But when I work up (completely dry thank god) I was not only a dark tanned colour (good) but I was covered in dark patches!!!!!!!!!! (bad). My nose for one had a massive dark patch on it and then my normal skin colour on the bridge of my nose. My feet were BLACK my hands were white and black. I was absolutely horrified to be completely honest. The photos just don’t do it justice.
After I washed about 4 times most had come off and I was a nice colour on my arms and face, although I had to even my face out with a lot of make up. My feet were still black, and still are almost two weeks after. I spent the rest of the day trying to even my hands out. I tried everything, I even debated whether to use bleach. I know that is extreme but my wrist’s were so bad and I had work that afternoon. I went onto some forums with titles like ‘HELP!!!!!!!!!!!!! FAKE TANNING DISASTER!!!!!!!!!!!!!!!’ and knew I was in the right place.
I found one post that said that baby wipes are the answer to everything and that would get it off. And do you know what? It actually worked… I had three left so by the time I finished (it takes a bit of elbow grease) they were dry as a bone but it worked. I couldn’t do my feet as they were just a lost cause. I also noticed it had enhanced the appearance of my blackheads. How awful! 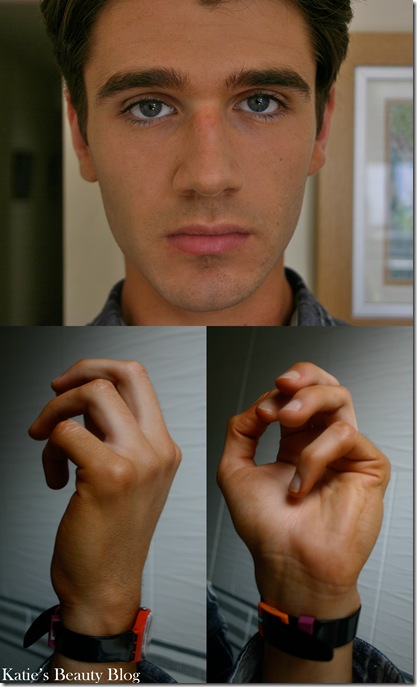 Conclusion…
I can completely see that maybe if I hadn’t used the mitt on my hands and feet (it does tell you to do that in my defence) then I would of been a lovely colour, but when you’re applying the tan it doesn’t seem to go very far. I don’t tan to be really dark, I am an extremely pale person (I resemble a piglet), I didn’t inherit my mothers Cypriot genes or my fathers German beautiful pale skin (I wish I could pull off a Nicola Roberts!) so I just want to have a bit of colour and too be honest, the hassle of this when I can just slap on some fake tan lotion is just stupid. I don’t like to be negative about things because a lot of thought has gone into it and it’s won awards and some people like it but it’s just not for me!

Alex & Ben’s Tanning Secrets
So I thought I would pass on to you my tanning secrets, that I have learnt from my partner Ben. We usually get what ever tanning lotion is on offer, but when there is nothing we stick with L’Oreal Sublime Self-Tanner which is around £8. It’s good; it doesn’t get all patchy and I usually put some moisturising cream on before hand so help blend the hard areas. I don’t do this on my face and back (I am having treatment at the moment for back acne so I don’t want to over moisturise it). But I have something to tell you: I was in the 99p shop in Peckham Rye where I live the other day and they sell fake tan for 99p(!!!!) and not just any fake tan… Hawaiian Tropic! I couldn’t believe my eyes. It’s called Island Radiance and it is by far the best tan I have ever used. It’s a nice dark colour not at all orange! So all of you get down the 99p shop!

What Katie says
I met the inventor of Tan Organic as well as Gavin Duffy from Dragon’s Den who shared with me the Tan Organic story and it sounded truly like a miracle worker. Before I gave it to Alex to try I also gave a bottle to my housemate who used it – she too went a lovely golden shade but did have quite noticeable streaks and patchy areas on her arms and legs.
I think the reason it didn’t blend in very well for Alex (or for my housemate) is because the actual product doesn’t include any drying agents such as alcohol, so it does take a lot more work to rub in which of course not every one has time for, however it does contain aloe-vera juice so its really moisturizing.

I think that Tan Organic is perfect for those who are VERY experienced at tanning with a liquid and for those that prefer a darker tan – Alex and I are pretty pale so perhaps it would have been best for a more experienced tanner to trial it. You can buy Tan Organic online here for around 20Euros.

Have you ever used Tan Organic? Do you have any tips to help fake tanning disasters?
Would you like more male guest reviews on my blog?