Those of you who have seen a few of my outfit posts will have noticed I have a tattoo on my foot.  In actual fact, I have three, I got my third just last month!

Its a Snooks family tradition that on my Grandma’s (<3) death day (20th April) we get something significant done to our bodies – one year my Mum got a tattoo, the next both of my parents got a belly piercing etc.  For a while now I’ve been wanting another tattoo (they are extremely addictive) and I convinced both of my parents to have them with me (I have THE best/coolest rents ever, huh!).

I knew that I wanted lyrics, Morrissey/The Smiths lyrics to be precise so it was just a case of choosing the actual lyrics, the font and deciding on placement.  I decided on song words from The Smiths ‘Handsome Devil’.  I absolutely ADORE Morrissey and The Smiths – I was brought up listening to their songs and going to see Moz in concert and his songs rubbed off on me!  I love the quote I chose, its completely ‘me’.  In terms of placement, I knew that I wanted it either on my side or back, and I chose to justify the quote to the right and have it on my right side.  Here’s a photograph. 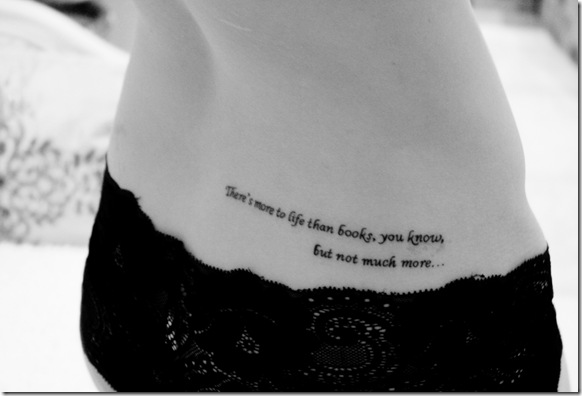 I absolutely adore it.  My tattoo artist did such a good job writing very gently – I didn’t want it to be too big, I wanted it quite dainty and he managed it (although he said afterwards that it was like writing on a grain of rice!).

And my other tattoo’s – 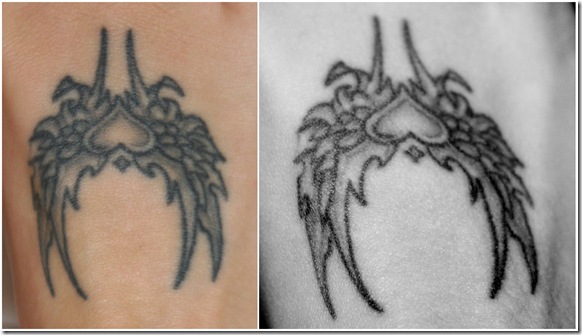 This was my first tattoo.  I got it on my 18th birthday as a present from my parents and its on my foot.  I love having a foot tattoo, especially when I wear heels.  One line above does need touching up but apart from that its perfect! 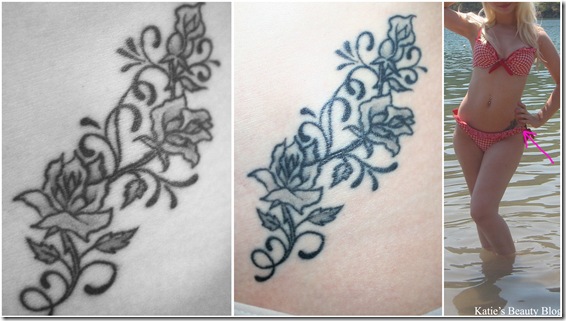 This was my second and its on my hip and travels down towards my lady parts (sorry about the bikini shot – I realised I don’t have ANY pictures of the placement of it apart from this cringy photograph.  Its just to give you an idea of where it is)!  They’re roses and not many people know I have this tattoo, its kind of a secret thing.  I didn’t want any colour in this, or in any of my other tattoo’s, I’d prefer them to have a similar look/theme and I want them to look gentle and feminine, not too loud.  I had this tattoo and the one above done by the same man, Ivan, at my local tattoo studio – I absolutely adore his style of tattooing and how detailed they both are, but unfortunately he left last year and so I got another guy who I like and trust in the same studio to do my most recent.  If I ever do decide to get another then I’d definitely go back to him.  (In the coloured photograph above it looks kinda blue, but its actually black!)

For the first two weeks after having your tattoo done, your supposed to wash it gently with a damp cloth and apply a moisturizer straight after, about 2-3 times a day.  I’m very obsessive about this and make sure its always moisturized – it will heal quicker this way and won’t be too itchy when it comes to scab off, and it won’t peel too much. 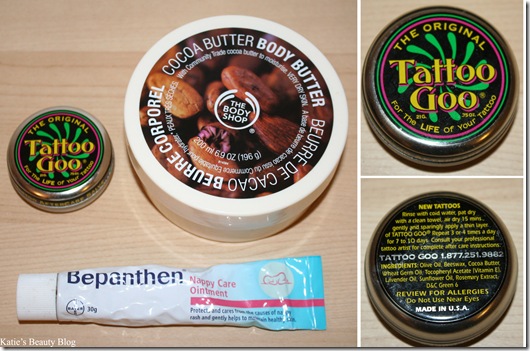 Bepanthen – this is actually a nappy rash cream but it works incredibly for using for the first week after you’ve had it done.  Its super soft and the formula is thick, creamy and moisturizing.  It doesn’t have a scent but because its white and thick it may transfer onto some of your clothes – this isn’t a problem, you can always wipe it off.

Tattoo Goo – This is probably a bit of a con because its really similar to Vaseline or any other moisturizing jelly, but it contains olive oil, wheat germ oil, cocoa butter, lavender oil, beeswax etc – all great natural ingredients to help repair and moisturize the skin.  This is good because its clear it doesn’t transfer onto clothes.

E45/Aqueous Cream – everyone has probably used this before once in their life and you can use the little tubes of it on your tattoo, preferably in the second week, after a first week of using something more thick and intense.  Good to carry around on you for dry patches, etc anyway.

In the second week after having the tattoo, my artist recommended using any kind of moisturizer that you know you don’t react you or have any problems with – for me this would be any of The Body Shop’s Body Butters (Cocoa Butter pictured above), Vaseline’s Coca Butter moisturizing oil, Korres Quince Body Butter etc.

Your tattoo should heal pretty quickly if you keep it moisturized.  Mine healed super quick (because the writing was so gentle I think), it took just over a week and a half.

So that’s a quick over view of my tattoos and my tips and products to encourage it heals nicely!

Do you have any tattoos? What did you use to heal them?