After the National Beauty Blogging Event in the Excel centre in February, Jess and I wandered down to the Professional Beauty Show and came across NuBar’s nail stand.  It was beautiful – completely overwhelming with so many beautiful nail colours available to purchase.  I’ll be honest and say I’d never heard of NuBar before, but because of the extortionate amount of shades I suspected they were well known and professional.  I managed to get my hands on two shades that I have fallen head over heels for, swatches below! 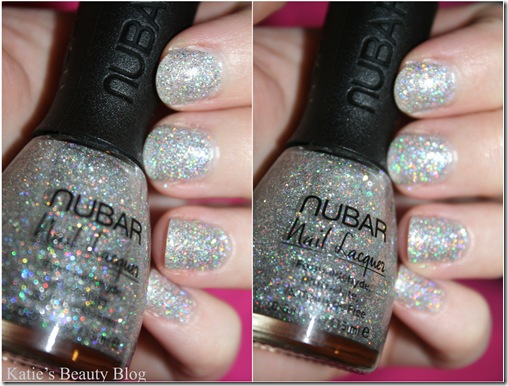 Its a fact that I’m completely obsessed with anything holographic and sparkly, this includes nail polish and so I carefully choose out Star Sparkle as a sample to try out from the brand.  Its described as a silver and holographic glitter in a clear base.  I’ve been having lots of girls asking me what nail polish this is when I’ve been out and about, its getting a lot of attention.  In the swatches above I used three coats – as its in a clear base you do need to layer it up to get the full effect.  This lasted around five days on my nails before starting to peel off.  Of course its a bit of a pain to remove because its a glitter but its worth it, it’s so damn beautiful!  This really sparkles and shines beautifully in the light and often looks like a silver glitter in other lights. 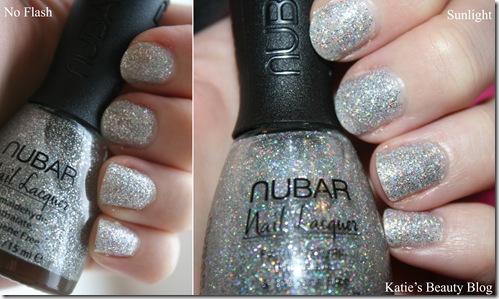 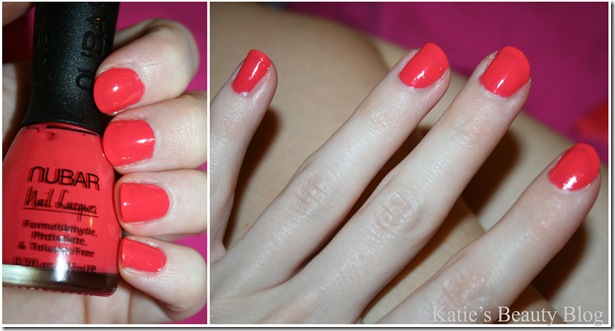 I have also received lots of compliments on this nail varnish, and I’m not surprised, its gorgeous.  The perfect shade of coral for spring and summer.  Looks corally-orange in some lights and pink in others.  I’m also really happy about the lasting time of this nail polish; it lasted four days without a topcoat before chipping and even then the chip was tiny.  The colour suits my skin being both pale and tanned (see previous fake tan review), and I’m pretty sure it’d suit all skin colours.  The swatches above are with two coats each – its really pigmented, the formula is lovely and creamy so it glides on smoothly.

What I think – I’m pressed with the lasting power of both of these polishes and they’ve become two of my favourites in my collection.  They retail at around £8 each, which is a bit pricier than Barry M and other high street polishes but I think its worth it for the lasting time and the good formula.  You can buy NuBar polishes online here.

I’m going to make a purchase soon once I’ve made some money, I’m already eyeing up the other holographic prism range!

Have you ever tried NuBar polishes?  What’s your favourite polish at the moment?