It might come as a surprise but I am a complete geek and bookworm.  I adore reading and I always have a book on the go, whether it be fantasy, fictional or novels.  Every Christmas or Birthday list of mine is mostly compiled of books and its an absolute must for me to read at least 12 books at every age (if that makes sense!).

In the past few years I’ve read some incredible stories, many of which have become firm favourites and I’d love to pass a list of some of my favourites on to you guys! 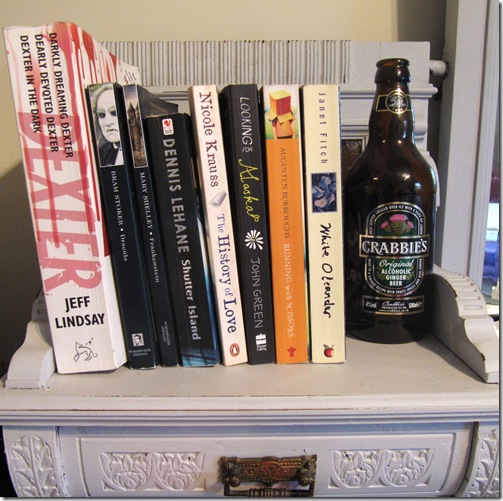 The selection I’ve chosen today are books which I think are perfect to read during the autumn/winter months, in front of the fire with a chai tea, whilst its freezing outdoors, but I’ve also popped in a few of my favourites that I read this summer. 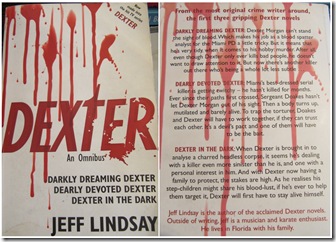 If any of you haven’t watched the Dexter TV series by now, you absolutely must!!! I’ve been an avid Dexter fan for the past three years now and I can’t get enough of the show.  I have converted all of my friends to Dexter lovers and I honestly have never met a person who hasn’t adored it.  Anyway, because of the show I was given the trilogy book for Christmas a few years ago.  The TV show was based on the books by Jeff Lindsay and if you like serial killers, murders and a bit of comedy in your books you’ll really like this read.  However, the book has a few differences to the show (which I won’t spoil for you) but I’ll say now that the programme is better than the book – but the book is fab for a quick read!

The Historian by Elizabeth Kostova (Not pictured above on shelf) 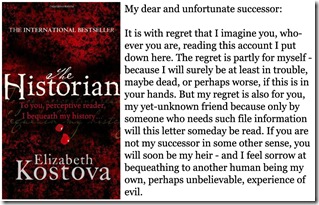 One of my favourite books ever because its wonderfully written and it opened my eyes to a different type of book.  Before I read this I read many comedic novels (see Running with Scissors) and general books but this completely changed what I went for after.  This story is incredible and its told through letters and diary entry’s of a father and a daughter, who go in search of Vlad the Impaler (aka Dracula) in modern day times.  I adore everything about this book – the history of the real life Dracula, how the story is told, the characters etc.  I have always wanted to be a detective (from a very young age – odd I know) and this book completely reinforced my desire to go out and have adventures, spend my time researching in libraries and travel the world to uncover mysteries.  I would recommend this to absolutely everyone! 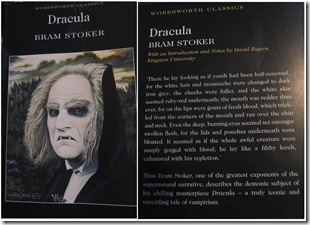 Once you read The Historian, I thoroughly recommend reading Stoker’s Dracula.  The Historian fills you in on most of the language and back stories of the legend of Dracula, so this book becomes a much easier read.  I now adore Dracula, its language, and how its told (again) though letters, newspaper clippings and diary entries.  The imagery conjured from the language of the book is beautiful and you may grow very attached to each character.  I adore that the majority of the book is set in old London.  Its a classic tale and a much better one of vampires than that of The Twilight Saga (but don’t get me wrong – I read the whole four book in the series and loved the first and last) but this tale is a great read, albeit a harder one. 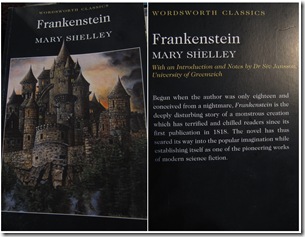 Another classic gothic novel (I got a bit addicted to them this summer).  Before reading this I had never seen a film about Frankenstein, nor knew anything about it, and the book was completely different to how I imagined it to be.  Frankenstein (a young professor at university) gets completely obsessed with the idea of creating life and animation out of nothing, and he succeeds but instantly regrets it when he realises how ugly and disgusting the life he created was.  So he runs and we are told the tale from many different points of views.  I’ll admit that I now adore Frankenstein’s Monster (even though he is always portrayed evil) and I’d recommend to those who want a quick but great read. 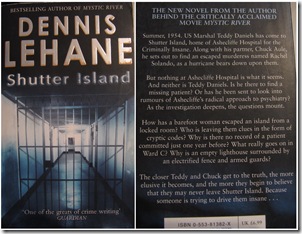 One of my favourite books from two years ago – Shutter Island has now been made into a film (starring Leo) and the book is just fab.  Again, it made me want to be a detective!  The story line is gripping and eerie and the twist at the end was pretty great so if you haven’t seen the film then read this.

Running with Scissors by Augusten Burroughs 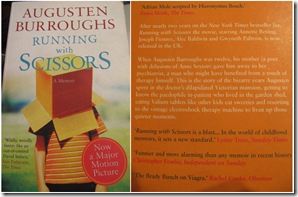 Augusten Burroughs is one of my top three favourite authors, I have every book of his now and I adore them.  He mainly writes memoirs and this particular book is of his childhood.  His mother sent him to live with her crazy psychiatrist and this book explains his time living there and recalls all the mad things that happened.  Some parts of the book are hilarious – laugh out loud hilarious, but other parts of this are quite sad – his parents relationship and just the odd situations that Augusten happens to fall into.  This is a great book for laughing with and I’m sure it’ll get you hooked to Burroughs and his other memoirs!  (This is also now a film – but read the book first!)

The History of Love by Nicola Krauss 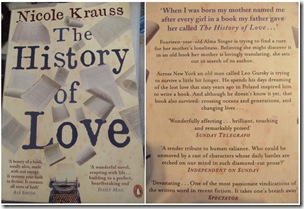 I read this over the summer in a few days and I love it.  At the moment I’ve got a thing for books which inspire me to live my life to the fullest and this is definitely one of these.  The History of Love is written through two different main characters – a grumpy old man called Leo Gursky and a young girl called Alma – who are in someway connected yet we aren’t sure how until the end.  A quote which sums this book up – “a novel in the form of a homage to things lost, as well as to unsolved mysteries”.

Looking for Alaska by John Green 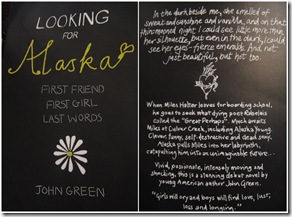 Another one I read this summer – about a guy, Miles, who goes to boarding school.  He meets Alaska Young, who he is blown away by and they become close friends.  The book is told in two parts – before and after, but I’ll leave it to you to read it to find out what happens.  This book made me cry (I’m very soppy) and it’s made me look forward to meeting someone new and the butterflies and excitement you get with crushes.

There we have it – Part one of my book recommendations.  It was only after I took the photographs for this post when I realised that I missed out my two favourite books ever, by the author Mitch Albom, but they will come in part two – probably sometime in the new year!  I hope you enjoyed this (surprised if you read it all!) and I’m sorry its quite a different post!

Will you be asking for any of these books for Christmas or have you read any of them?  What are your favourite books, recommend them to me and I’ll put them on my Xmas list!!