This is going to be a completely different post to anything I have ever written before on my blog.  It’s going to be a very personal story that not many know about me, but I want to tell in case there are any other people going through what I once went through, in hope that this might answer some questions for them or might help them through major spine surgery or a tough time.

When I was 11 I was diagnosed with scoliosis.  Scoliosis is actually quite a common medical condition, which basically means that you have a curvature of the spine.  Mine was congenital scoliosis which means that I was born with the *deformity*, although my parents and I were completely unaware of the fact that it was scoliosis until I was 11.  I was at my weekly dance classes and we were doing a ballet exercise where my teacher placed a full glass of water on your back when you were bent over, to make sure that you could achieve a flat back.  My teacher noticed a bump and couldn’t place the glass on my back and so she told my parents – who too had noticed the bump a few times over the years but didn’t realise it was serious.

At my first X-Ray they discovered that my spine had a 32 degree curve… pretty scary!  I was only 4’6’’ at the time, so I was really small and so the curve of my spine was the reason I was (and still am) so tiny.  With months of more X-rays, MRI scans, cardiac-echo tests and kidney ultrasounds we learnt that thankfully nothing else was wrong with me but we learnt that the curve was progressing and getting worse.

My back before the operation – You can see one shoulder is a lot lower than the other (left) and when bent over I had a noticeable lump on one side of my back (right). 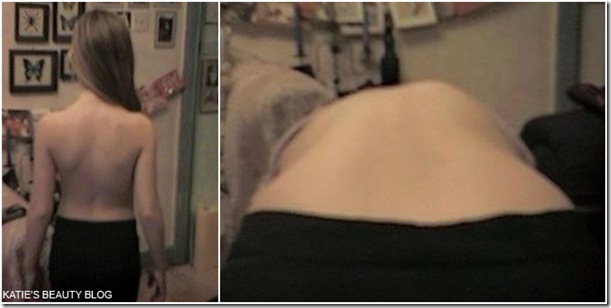 The X-Rays of my spine before my operation. Standing straight (left), and bending to the side (right). 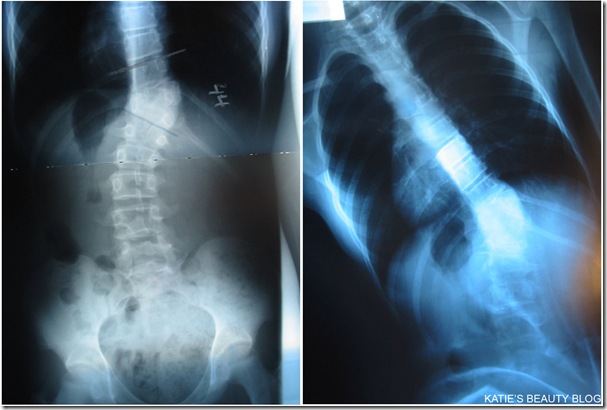 The Operation – I was booked in to the Portland Hospital the following Easter (I was 12 years old by this point) to have the Major Spine Surgery to straighten my spine.  My actual scoliosis came from the result of having a hemivertebra at T11 (thoraco-lumbar).  This means that one of my vertebra hadn’t fully formed (half a vertebra in the shape of a wedge instead of a square) which also means that I am missing a rib!!!

By the time my operation came my spine had a 45 degree curve – which meant that the curvature was progressing really quickly – if I hadn’t have had this operation I would have a hunchback now.  There is a risk with the operation that you could be left completely paralysed from the waist down, if your spine or nervous system gets damaged.  It was a big decision, but my parents and I decided to go ahead with the operation.

Gory Details – During the operation I had both anterior and posterior surgery (an incision down my back and another on my side).  I had a titanium rod placed on my spine, which is held in place with large bolts – one to the vertebra above and one below the hermivertebra.  I then had a section of my ‘extra’ rib removed and used as grafting material so that all three of the vertebra were fused together.  The surgery was about 4 hours.

After the Operation –
Trying to play gameboy an hour after the op, ha! (left) Asleep (right) 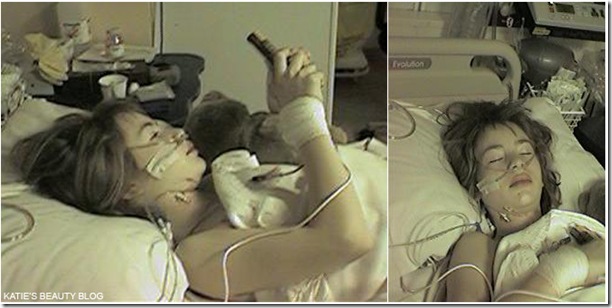 When my parents first saw me after the op I looked chirpy (haha!) but my face was swollen.  I had antibiotics and saline drip neck lines, a morphine drip in my left hand (& a stand-by needle in my right), a chest drain, catheter, pulse and blood pressure monitors etc, a gastric-nasal tube and oxygen tubes and face mask.  I was on 2.5mg of morphine an hour (which was dispensed very slowly via a remote pump) – and I only lost about half a pint of blood in the op and didn’t need a transfusion.

I was in intensive care for almost a week after the operation and I couldn’t move at all – I had nurses who would turn me over during the night if I became uncomfortable.  Over the days the tubes slowly came out one by one and I had my back brace plaster cast fitted (apparently this was the first time I cried after my operation, as turning me back and forth hurt).

After that week I was moved back to my own bedroom in the hospital (wearing my back brace).  I had to learn to walk again and underwent physio (I remember carrying bags of sugar up and down some stairs, ha!).  I had a 6 inch cut down the centre of my spine and a 7 inch cut down my side which were starting to heal.  I was very dizzy though and couldn’t do much for very long (which was devastating for me because I had been bought the new Spyro playstation game which I desperately wanted to play but couldn’t because it made me feel nauseous).

Me in hospital wearing my back brace (I chose to have a pink gingham pattern!) (left) and my scars after the operation (right) 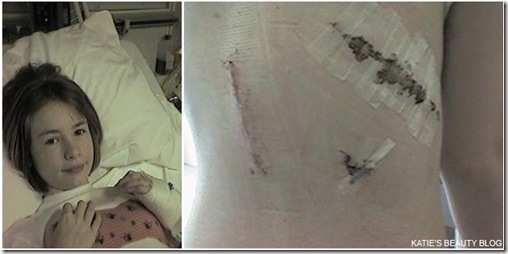 My X-Rays after the operation.  I will have the titanium bolts in my spine for my whole life! 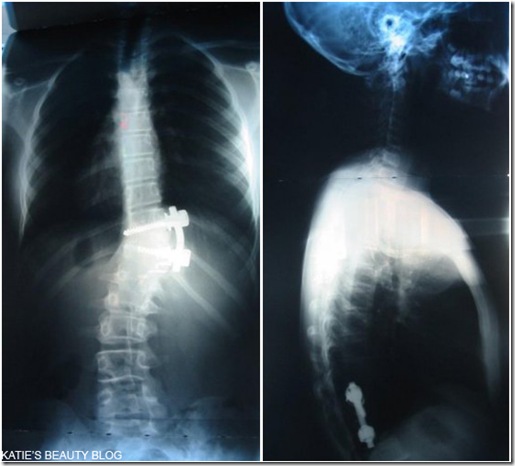 At home – My dad had to make me a bed downstairs as I couldn’t sleep on the top bunk in my bedroom.  I had a month off of school but had to wear my back brace for 3 months.  I remember my back brace very well – I hated wearing it as my scars were itchy and I obviously couldn’t scratch them (although my sister and I devised a ‘straw up the vest system’ which meant I got to itch slightly, haha!).

I returned to the hospital 10 days after the operation to have my stitches removed.  At my 6 week check up with my surgeon we found out that my curve had gone down to 20 degrees – an amazing result! 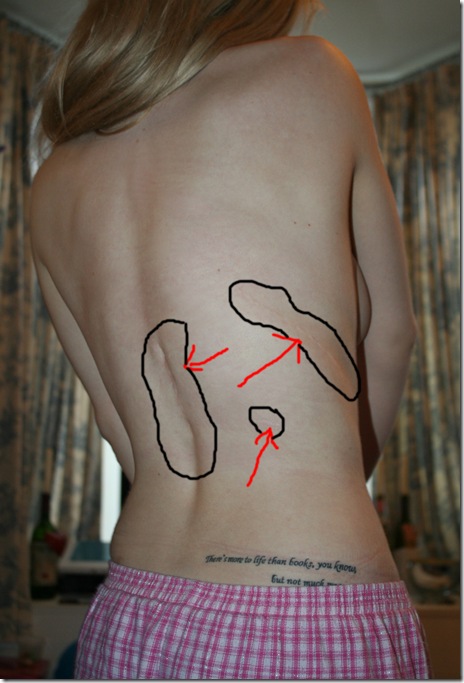 I am all well now – I am SO happy I had the operation. If I hadn’t I would have a proper hunchback now and would probably be even shorter than I am. !  I have two pretty impressive scars on my back (and a smaller one where my chest drain was inserted) but they have faded dramatically and are hardly visible.  I get the occasional back ache but I now have no physiotherapy.  I will have the bolts in my spine for the rest of my life and I will not grow any more, obviously.

I am only 4’11’’ – I grew about 5 inches after the operation but then stopped.  This is the part of the whole thing which is hardest for me.  I know that good things come in small packages, whatever, but I really do hate being this little.  From behind I must look like an 11 year old girl.  When I work as an actor in schools, most of the children in year 7 are taller than me.  I feel like I get judged a lot by others because of my height.  I get ID’d almost everywhere I go and some people generally talk down to me because they think I’m younger than I am.  If I was 5 foot I would be so happy, but alas, that’ll never happen.

I get a little self conscious now and then when going swimming but that doesn’t stop me from wearing a bikini.  It’s also a little awkward when dating new people (if we get to that point in the relationship) but I normally just make a joke of it (oh yeah, did I tell you I got attacked by an alligator when travelling in Australia one time?).

If you have scoliosis and would like a chat – or are considering having the operation and want some advice then please don’t hesitate to leave me a comment or send me an email.  I’ve been through it all and have come out strong and healthy in the end (my spine is now actually stronger than most people – I am bionic woman!).

Do you know anyone with scoliosis or have ever had any major spine surgery?